NewsRantsAndReviews says:”Obama has one word for those who didn’t get in over their heads during the recent housing boom and have paid their mortgages on time:   Suckers!”

Hundreds of taxpayers took time out of their busy day to protest President Obama’s “stimulus” bill-signing in Denver today. 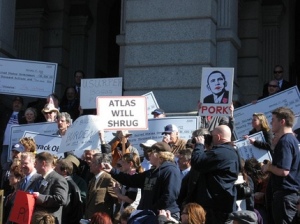 Jim Pfaff of Colorado Americans for Prosperity, Jon Caldara and the Independence Institute, former Rep. Tom Tancredo, and several GOP officials and state legislators spearheaded the event. Count us all among the “chattering classes” appalled at the massive pork and the short-circuited process that paved the way for the trillion-dollar Generational Theft Act.

And from Seattle yesterday:

Way. To. Go.  Let it spread all across the country.

H/T Michelle Malkin and My Own Side.