Conservative radio host Rush  Limbaugh’s latest jab at the National Organization for Women has attracted  more Facebook “likes” in 24 hours than NOW’s main page has collected in a  little under four years.

Limbaugh’s new “Rush Babes for America” Facebook page – also known as “The National Organization of Rush Babes” — was open for  public viewing just prior to the beginning of his radio program Tuesday. He  announced it in the third hour of his show, between 2 p.m. and 3 p.m. EDT.

National Organization for Women and Media Matters are BULLIES.

Irene, the hurricane that was — well, a tropical storm

Hurricane Irene was downgraded to a tropical storm Sunday morning as it made landfall over New York’s Coney Island with winds clocking 65 mph.

I was watching this yesterday and I am in doubt if it was even a hurricane when it first hit landfall.  If so, it certainly was not after that.  You could see there was no eye, that it had already broken apart.

Which is to be expected.  You just can’t tell what a hurricane will do.  That’s the hard part.  To evacuate or not to evacuate? To leave or ride it out?  This is what happens, over and over again the alarm is sounded and nothing happens.

Bloomberg and Christie are all over the place demanding people leave their homes.  Even Obama got pried out of his vacation to make an appearance at where?  FEMA headquarters.  Has he yet acknowledged Joplin? 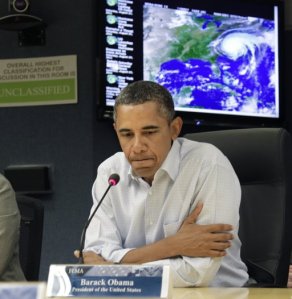 At the coordination center, Obama said getting through the storm will be a “tough slog.”  (Get a load of the specially made up FEMA Barack Obama name plate, in case anybody wondered if it was a photo op.)

But what is most interesting is the way the media just keeps up the hype.  All day yesterday you see what has to be staged “reports” and they fog up the camera and splash water on the lenses, maybe even fake wind noise to make it look like they are in the midst of the most ominous storm ever.  They had Julie Banderas on camera in New York in perfect makeup all covered up with cap and designer raincoat and I don’t think there was a drop of water anywhere.  Somebody, I think it might have been the police chief, came on later in shirtsleeves and no hat or cap and shamed her into taking the hood down.

MSNBC calls in the big guns with Brian Williams anchoring and Al Roker on the seashore in rain gear, walking along the shore in Long Island.  Shep Smith working all weekend.  Geraldo wading in puddles in the streets of NYC last night.

Just a big media production.  And this morning, I see they finally downgraded it to a tropical storm.

Ever since Katrina was made into a big political weapon against George Bush, they have boxed themselves in. It’s not about safety, they don’t care a hoot about the safety of the people, it’s not about anything but these politicians trying to cover their asses in case something horrible happens and, of course, these states are all about collecting federal money.  The higher the winds, the more damage, the more disaster money they get.  (I wonder if the number of people without electricity also is a marker as to amount of disaster money.  Seems to be an important number…..)

That’s not to say hurricanes can’t be disastrous and horrific.  They can.  But there have been hurricanes since the beginning of time.  You do the best you can, but nobody, and I mean nobody, knows what they are going to do.

They all need to just get a little humility and admit they missed it this time.