But he gives permission to an Indian tribe to kill bald eagles for their religious ceremonies. 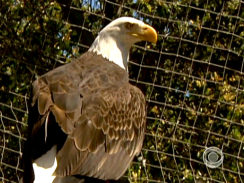 I don’t think he likes American symbols any more than he likes Christian symbols.  Remember when he had Christian signs and symbols covered at Georgetown University?

And back to the War on Catholics:

Barack  Obama’s controversial regulation of the health care policies offered by  religious organizations, one day after Catholic leaders repeated their offer to  hash out an agreement.

“The solution that was reached here … has been reached, and we firmly believe  that it achieves the goals that the president set,” Carney said at Thursday’s  White House press conference.

On Feb. 10 Obama announced a new regulation that forces religious groups to  financially support activities they abhor, but that the government supports. In  particular, the president directed religious organizations to provide insurance  policies that offer free contraceptives.

But “government has no place defining religion and religious ministry,” said  the Mar. 14 statement by the top-level administrative committee of the United  States Conference of Catholic Bishops.