Manny Pacquiao feels the wrath of the “loving liberals” 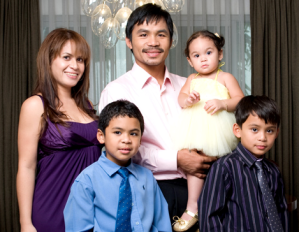 The “tolerant” same-sex marriage left has struck again – this time, at the popular hangout The Grove, in Los Angeles. The owner of The Grove, Rick Caruso, tweeted that iconic boxing great and Philippines Congressman Manny Pacquiao would not be allowed “on the premises” thanks to Pacquiao’s outspoken opposition to same-sex marriage. “Boxer Manny Pacquiao is not welcome @TheGroveLA,” he tweeted. “@TheGroveLA is a gathering place for all Angelenos, not a place for intolerance.” Pacquiao was supposed to do an interview today with “Extra” at The Grove.  http://www.breitbart.com/Big-Government/2012/05/16/Pacquiao-banned-LA-Mall

Look at this family.  America giving opportunity and lifting them up with success.  I am not a boxing fan, so this is the first I have heard of him.  Very, very sad.  The man is a Christian and he has stated his beliefs.  This is obama’s America where opinions are met with persecution.  Next these liberals are going to start throwing the Christians to the lions while they cheer from the colisium.  It is the same spirit driving them.

The guy is an obama supporter, but yet absolutely not allowed by the bully left to disagree with him.  My only hope is maybe he will open his eyes to what the far left is all about.  Remember what they did to Juan Williams when he strayed a bit.  He is still chattering on with his democrat talking points as far as I know, even though it was conservatives who stood for him and with him when he was attacked.

I see they call this fighter Pacman.  He can go either way, I guess.  He can cave and bow down and kiss their feet and beg and grovel for forgivness or he can stand his ground and tell them to go eat dirt.  I hope it’s the latter.

Honest to God, I am pretty hard, but this breaks my heart.

P. S.:  He clarified his statement.  I knew what he meant.  It was the reporter who mislead by including a scripture that was not referenced by Pacquiao.

I somehow missed this part where obama is once again invoking the Name of Christ to push his agenda, as he endorses homosexual marriage using the Golden Rule.  As follows:

“This is something that, you know, we’ve talked about over the years and she, you know, [the First Lady] feels the same way, she feels the same way that I do. And that is that, in the end the values that I care most deeply about and she cares most deeply about is how we treat other people and, you know, I, you know, we are both practicing Christians and obviously this position may be considered to put us at odds with the views of others but, you know, when we think about our faith, the thing at root that we think about is, not only Christ sacrificing himself on our behalf, but it’s also the Golden Rule, you know, treat others the way you would want to be treated.”

Sometimes I wonder if this “practicing Christian” has even read the Bible.  And the Golden Rule works both ways.  He should start by treating others (who disagree with him) as he would like to be treated.

He’s the one who brought Christianity into the discussion, and now Chris Matthews has put the obama on the same level as God, so I have to respond…..

3  The Pharisees also came to Him, testing Him, and saying to Him, “Is it lawful for a man to divorce his wife for just any reason?”

4  And He answered and said to them, “Have you not read that He who made them at the beginning ‘made them male and female,

5  “and said, ‘For this reason a man shall leave his father and mother and be joined to his wife, and the two shall become one flesh’?

6  “So then, they are no longer two but one flesh. Therefore what God has joined together, let not man separate.”

Then I heard what seemed to be  the voice of a great multitude, like  the roar of many waters and like the sound of mighty peals of thunder, crying out,

“Hallelujah! For the Lord our God the Almighty  reigns.

7 Let us rejoice and exult and give him the glory, for  the marriage of the Lamb has come, and  his Bride has made herself ready;

8 it was granted her to clothe herself with fine linen, bright and pure”—

for the fine linen is the righteous deeds of the saints.

9 And the angel said to me, “Write this:  Blessed are those who are invited to the marriage supper of the Lamb.” And he said to me,  “These are the true words of God.”

God uses marriage to describe the relationship of Christ and the Church.

Romney wins this election.  No doubt about it.  And in numbers similar to those North Carolina numbers yesterday.

As Obama appears with his hair color touched up, in eye brow pencil and eye shadow…..

He doesn’t do that when he’s speaking from the heart.  (Well, some but not too much.)

And he’s so Special, that when he Flip-Flops it’s Evolution.  Too funny.

I expect next that he will come out of the closet himself.

Oh, yeah, and I’ll bet Anderson Cooper and Shep Smith are just over the moon.