Mark Levin montage – too funny.  I KNOW the American people are not falling for this kind of hysteria.   Behold “The Liberal Freak Show” on the House of Representatives floor last week.  It is an embarrassment to the country.  (Well, not all was on the House floor, I guess, but the liberal media was doing all they could to get out the radical message for the dems.)

Levin played for his listeners a montage of various Democrats making remarks about the budget battle that would have been highly-ridiculed three months ago if made by a Republican.

Up third was former House Speaker Nancy Pelosi (D-Calif.) claiming, “One of these bills before us, six million seniors are deprived of meals.” Next up was Jesse Jackson saying, “This is a civil war fight.”

In the fifth position was Sen. Dianne Feinstein (D-Calif.) stating, “This is an opportunity for the right-wing in the House to really sock it to women.”

Delegate Eleanor Holmes Norton (D-DC) weighed in next asserting, “This is the equivalent of bombing innocent civilians.”

Senate Majority Leader Harry Reid (D-Nev.) chimed in, “All this to stop women from getting regular tests and preventative services they need.”

Sen. Barbara Mikulski (D-Mary.) also weighed in, “This entire debate has included throwing women and children under the bus.”

All I want to know is can we do some retroactive abortions??  Put these people out of their misery.

Eleanor Holmes Norton deserves a spot all her own.  She’s not even a real congresswoman, just some kind of token Delegate for Washington, D. C. who can’t even vote.  That does not stop her from spurting out hateful words though, does it.   Watch this video and you will see this is one more vicious woman.  It’s all over her face and the venom is just dripping from her voice.  And talk about violent rhetoric?!?

Here’s Ms. Holmes Norton letting her hair down.  🙂  That is, if she had any hair.  Obviously in a happier moment…..This was probably back when she was getting her way and planning on those 40 years of democrat rule.  Looks like Franklin Raines with her.  What do you think?

P. S.:  At one time, I said to myself, you don’t want to lower yourself to the level of the democrats and their complete abandonment of the civility they want to lecture others about, but after this past week, I have changed my mind.  I am going to their level.

And the president is SILENT as his crew and his party uses brutal personal attacks and absurd rhetoric to vilify the republicans and especially the tea party for trying to bring just a little bit of fiscal sanity to the country.  Yep, enough is enough.  They don’t deserve civil treatment, nor do they deserve respect.  And they are not going to get either from me.

What democrats said about the “nuclear” option in 2005

Are the democrats the biggest hypocrites on the planet?

This video is making its way throughout the internet.

Too funny.  Listen to the democrats and what they said about the nuclear option in 2005 during the Bush administration, including comments from our president, then Junior Senator Barack Obama and now Vice President Biden.  The same nuclear option they want to use in order to pass Obamacare against the will of the American People.  Hypocrites!

NOTE:  56% DO NOT approve of the health care being jammed through.  They don’t care what we think.  Talk about tyranny.

AGAIN:  They are defying the will of the people if they go through with this.

The tone has changed a bit since the 19th election, but it’s kinda fun to look back at the ridicule the tea parties have suffered.

Below, watch Rachel Maddow and Ana Marie Cox mock “teabaggers” prior to the Tax Day April, 2009 protest.  Notice the smirk on her face.  She is so cute, huh?

Odd, when you type in the word on you tube, all that comes up are these videos disparaging and making fun of the tea parties.  Now, I know there are many, many videos out there in favor of them, so the search mechanism seems very fixed.  Definitely trying to control the perception.  But then it is to be expected from You Tube/Google. See Google Goes to Washington

Tom Friedman is just saying “he doesn’t sense a positive agenda”  from the tea bag movement.  Notice:  The positive agenda is to change Washington, D. C., by use of the ballot box, seat by seat.  That is the agenda.

One to watch: Crist/Rubio in Florida.

“The Republican primary in Florida, which pits Governor Charlie Crist against Marco Rubio, is being watched carefully as a harbinger for the impact the Tea Party may have on the midterm elections.” 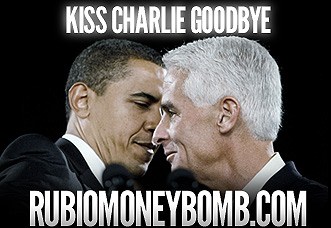 This is the seat vacated by the resignation of Mel Martinez.

Crist appointed George Lemieux to basically hold the seat for him.

“Lemieux, 40, was Crists’ closest and most loyal adviser and political guru. Lemieux ran Crist’s 2006 campaign for governor — earning the nickname “maestro” from the governor — and later served as his chief of staff. Before that, LeMieux was Florida’s deputy attorney general under Crist from 2003-2007.”  From Orlando Sentinel
Posted:  01.26.10