Obama living in wonderland – mentally challenged or a man with a plan?

This is a real picture of the president in Orlando in January of 2012.  He was pushing his Executive Order to boost tourism to the USA. He really did fly Air Force One to Disney World for a 13 minute speech in front of Cinderella’s Castle.This is a perfect depiction of the la-la land he is living in.  He made this comment:

“Obviously our national security is a top priority,” Obama said, as he stood in front of the Magic Kingdom. “But we also want to get more international tourists coming to America.”

So he is admitting right there that there is a national security concern.  I thought at the time it might not be a good idea to loosen requirement for entry into the country, and I wonder that today.  It was under the guise of creating jobs, but where are the jobs?  Plus this was his idea alone instituted by Executive Order, not by Congress. 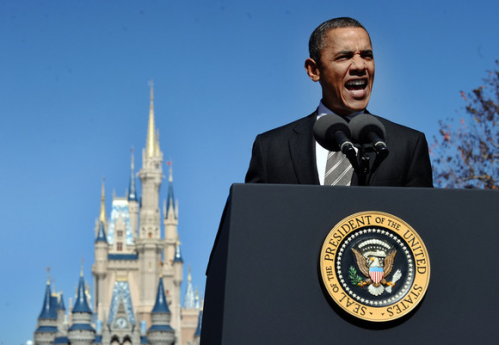 He also said:  “People want to come here,” he said. “So this is what it’s all about: telling the world that America is open for business.”

Well, maybe not for thousands who don’t like us much.

Dressed in a suit and armed with nothing but a box cutter, they may seem harmless…..Just sayin’.

I feel as though we are hung out to dry and very, very unsafe at this time.

Another “Fast and Furious” type scenario, this time in Libya?

(CBS/AP)  J. Christopher Stevens, U.S. Ambassador to Libya, who was killed in an attack on the U.S. consulate in Benghazi, eastern Libya, on Sept. 11, 2012. (State Department)
Updated at 9:27 a.m. Eastern(CBS/AP) U.S. Ambassador to Libya J. Christopher Stevens was among four Americans killed in an attack by Muslim protesters on the U.S. consulate compound in Benghazi the previous evening, the U.S. government confirmed Wednesday.”I strongly condemn the outrageous attack on our diplomatic facility in Benghazi, which took the lives of four Americans, including Ambassador Chris Stevens,” President Obama said in a written statement released Wednesday morning. The U.S. government had confirmed one American death on Tuesday.President Obama said he had ordered heightened security at all U.S. diplomatic offices around the world in the wake of the attack in Benghazi and a similar but less violent incident in Cairo on Tuesday. Both incidents were sparked by hardline Muslims protesting a film made in the U.S. which insults the Muslim prophet Muhammad.Military officials told CBS News an anti-terrorism team of U.S. Marines was being deployed to Libya to help secure U.S. interests in the country following the attack. The State Department said, however, that no Americans were remaining at the facility in Benghazi. State officials would not confirm how many Americans were evacuated, or to where.Wanis al-Sharef, a Libyan Interior Ministry official in Benghazi, said the four Americans were killed when the angry mob, which gathered to protest a U.S.-made film that ridicules Islam’s Prophet Muhammad, fired guns and burned down the U.S. consulate in Benghazi.He said Stevens, 52, and other officials were moved to a second building – deemed safer – after the initial wave of protests at the consulate compound. According to al-Sharef, members of the Libyan security team seem to have indicated to the protesters the building to which the American officials had been relocated, and that building then came under attack.…..Al-Sharef said the Libyan guards employed to guard the consulate building were far outgunned by the protesters, and thus retreated when the building was stormed.   http://alturl.com/qqjyw  (They abandoned their post!!!)

*Warning* Graphic pictures of an injured or dead Ambassador Stevens

Many many questions are raised about these incidents both in Libya and Cairo yesterday (9/11).
Q.  Were these Americans (including 2 Marines) killed in Libya by American provided guns?
Q.  Why was this consulate compound guarded by “Libyan security team” and why did they tip off the protesters of the location of the ambassador?
Q.  How in the world did these people in Benghazi and Cairo know about some obscure film when it’s not even known of here?
This was the first statement from the American Embassy in Cairo whining about “hurting the feelings of Muslims”.  Notice the Seal of the United State of America in the upper lefthand corner of the stationery.:
Can you say commander and chief?  Who would that be?
http://egypt.usembassy.gov/pr091112.htmSeptember 11, 2012

The Embassy of the United States in Cairo condemns the continuing efforts by misguided individuals to hurt the religious feelings of Muslims – as we condemn efforts to offend believers of all religions. Today, the 11th anniversary of the September 11, 2001 terrorist attacks on the United States, Americans are honoring our patriots and those who serve our nation as the fitting response to the enemies of democracy. Respect for religious beliefs is a cornerstone of American democracy. We firmly reject the actions by those who abuse the universal right of free speech to hurt the religious beliefs of others

Sounds to me like something that would come directly from the mouth of our feckless leader.