I hope they got some DNA or something to prove it was him.  If not, there will be conspiracy theories forevermore.

A U.S. official says Osama bin Laden has been buried at sea.

After bin Laden was killed in a raid by U.S. forces in Pakistan, senior administration officials said the body would be handled according to Islamic practice and tradition. That practice calls for the body to be buried within 24 hours, the official said. Finding a country willing to accept the remains of the world’s most wanted terrorist would have been difficult, the official said. So the U.S. decided to bury him at sea.

This is what I’m talking about.  Use their own tactics to bring them down.  Get in their faces.  If they bring a knife, we’ll bring a gun:

For about 39 minutes Wednesday afternoon, the Obama Facebook Townhall event page was down.

According to representatives of the conservative group ForAmerica (which is chaired by conservative Brent Bozell) they are likely responsible. Just prior to the crash, ForAmerica sent out word to their nearly 1 million fans on Facebook that they should post comments on the site.

Tagged as Barack Obama, conservatives take it down with mass comments, Facebook Townhall

Just some of the highlights from Tea Party Rallies, Tax Day, 2011.

(Paraphrasing) The only thing the stimulus plan stimulated was a debt crisis and a tea party.

More big government:  We don’t want it, we can’t afford it, and we are unwilling to pay for it.

Barack Obama’s solution:  Solar panels and really fast trains.   He says, All Aboard a bullet train to bankruptcy.

And this one is my favorite:  To the president:  You demonized the voice of rreason with class warfare and fear mongering.   I say to you person to person, parent to parent, Barack Obama, for shame for you to suggest that the heart of the conservative movement will do anything to harm our esteemed elders or children with disablities…..

“We will win back our country.  We will not squander what we have, we will fight for America and it starts here in Madison, Wisconsin.  It starts here, it start now.  Mr. President, game on!! ”

Funny.  But it really isn’t funny.  Why is our alleged president so concerned about democracy in Egypt when he is defying our constitution? He wants to include the Muslim Brotherhood at the table and as part of the government.  Did you hear him insist that the Coptic Christians have a place at the table?  Or does he believe in the separation of church and state but not separation of mosque and state?

But oh what a contrast in the way the media has reported this to the way they have covered the tea party movement.  Anybody wonder why that is?  And this is why I don’t believe what they are saying.   In fact, knowing how they lie and distort the truth, if they take a certain position, I am immediately suspect of it.

Let’s pitch some tents on the white house lawn, burn a few cars, and maybe Obama will resign.

The “sunny” demonstrators of Cairo

I turned to Morning Joe this morning for the first time since the Egypt riots started.

Eugene Robinson was describing the mood of the crowd as “sunny” and “buoyant.”

Then on the Daily Run Down, Brian Williams comes on, from Cairo, and describes the crowd as ? darn can’t remember the word he used, whatever, it made it sound like they were dancing in the streets.  Just remembered:  It was “jubilant” is the way he described them.

So did I miss something?  What happened to the fires and the rocks and smashed cars and broken ancient statues?

But then this is MSNBC.  These are the same people who have described the Tea Party, a peaceful assembly of American citizens as angry mobs, racists, thugs and tea baggers.  Nice to know Egyptians get more respect than we do.  But it’s okay.  Really.  This just makes me look at this more closely.  These demonstrators more than likely are not what they first appear, for democracy and all.  Anti-American maybe?

The first flights evacuating stranded Americans from Egypt took off today amid escalating violence across the country and desperate scenes at the capital’s international airport. 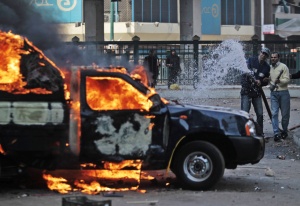 In Egypt, violent anti-government demonstrations have claimed 27 lives and left thousands injured.  One source dated today says there have been 100 killed.

The Sacramento Bee has described the demonstrations in Cairo as:

In one of many astonishing scenes Friday, thousands of anti-government protesters wielding rocks, glass and sticks chased hundreds of riot police away from the main square in downtown Cairo and several of the policemen stripped off their uniforms and badges and joined the demonstrators.

There was the burning of tires and police cars.

Compare the scene above with this scene.  This is democracy in action with peaceful assembly addressing grievances and taking it to the VOTING BOOTH – civil and quite orderly.  How radical, huh? Of all the Tea Party demonstrations, there has not been one arrest.  No violence whatsoever.  Yes, prayer and song and the pledge of allegiance to the flag.  Lots of talk about the Constitution.  And what did the MAINSTREAM corrupt media have to say about the Tea Party?  They have lied, that’s what they have done. 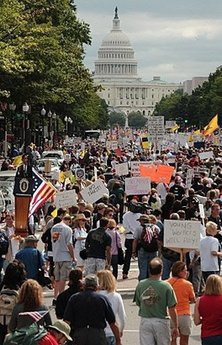 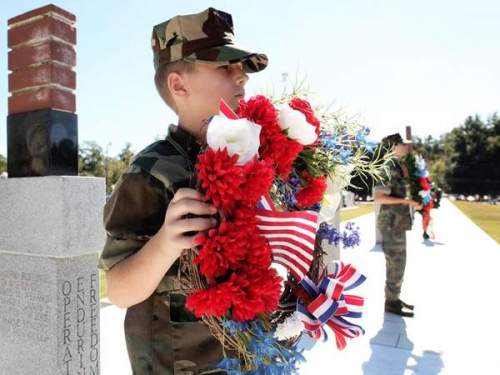 Bobby Johnston, 12, with the Milton Lewis Young Marines, holds a wreath in honor of Operation Enduring Freedom during the Annual Veterans Day Celebration.

At 11 a.m. on the 11th day of the 11th month, hundreds of people were gathered at the Kanapaha Veterans Memorial to commemorate the sacrifices of millions of American military personnel.

“That this nation, under God, shall have a new birth of Freedom”

Today’s the day when we begin to take our country back to its constitutional foundation, one seat at a time, one state at a time.

I heard a politician in a challenged seat lamenting, “At the street level, they know the ratio of debt to GDP.”  Ha. This supposed “riff-raff” group of American citizens have been called many names, ignorant  being one of them.  But that’s the problem for the politician who has ruled against the will of the people, the electorate is wide awake and extremely informed.  And we are everywhere.  From sea to shining sea.

We said that “We Will Remember in November.”  I hope it’s a clean sweep.   It’s a beginning and a beginning only.  The real fight starts tomorrow.  This is America – back to “Of the People, By the People, For the People.”

God Bless Us All.

“…..that this nation, under God, shall have a new birth of freedom — and that government of the people, by the people, for the people, shall not perish from the earth. — Abraham Lincoln – Gettysburg Address [1863]