Timeline of how a small town story is manipulated by the left to inflame passions and become a national outrage: 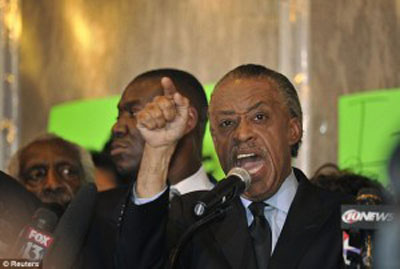 #TeamDueProcess @RETRO_Juice: Fuck Zimmerman with a passion , we want justice .. or a motherfucking casket !

#TeamDueProcess @Gwillotine @HillbillySkill @mmfa  I think Limbaugh should be shot in the face at close range.

There are many, many more.  Anybody worried about hate speech?

I have not a doubt in this world that this was set in motion straight from the white house and the new black panthers is the lynch mob.  They are not through yet either.  And the terrifying thing is we have a new black panther (in spirit) in the white house.  It’s a very serious matter.  There’s lots of raw hatred and calls for violence and for the killing of George Zimmerman.  These people want revenge not justice and we do not have a leader.  I heard a “prophet” say there would be a race war this summer leading up to the election.  I did not believe it then, but now – this very well could be the beginning of it.  Looks like nobody in authority is going to give a crap about trying to calm it down..