Cheney Mason, Casey Anthony’s other attorney, has expressed his complete disdain for the media, both in word and deed.  I understand he was doing this case pro bono and that he up until this time has had a stellar reputation and was well-respected.  But honest to God, folks, this is about the most childish unprofessional display I have ever seen.  I think this was maybe taken through the plate glass window behind which the defense team was having a victory party yesterday, so maybe he was drunk.  Let’s hope he has some excuse.

The media or parts of it really have been awful in reporting this case and convicting Casey before her trial, but for goodness sake, he is all in for the constitution as it applies to defendants and their presumption of innocense, but does not believe in the other part, freedom of speech and freedom of the press?  Come on, Mr. Mason.  It obviously did not have any impact whatsoever on the results in this case, as they exonerated your client. 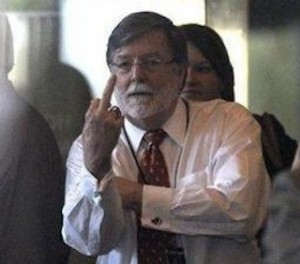