The People’s Cube has the REAL story – it was a penis plant!

Weiner had penis planted on him by Republican operatives

The news is just now breaking that Leader Pelosi and DNC Chair Debbie Wasserman-Schultz is throwing Anthony Wiener under the bus. Supposedly they want this upstanding public servant to resign after chit-chatting with a 17 year-old girl from Delaware.
Here is my theory: This is a Republican setup. That’s right — someone hired this “girl” to contact and carry on a relationship with the Congressman. The penis? Also a setup. The penis was planted on the Congressman in an attempt to get him to show it off to unsuspecting females (we are Democrats, after all, and lack male genitalia! It would be only natural to show such a blessing off!)
Nancy Pelosi — who I admire — has no right whatsoever in asking Rep. Weiner to step down from his office. Nancy Pelosi, of all people, should know that former politicians cannot survive the cruel world of work, responsibility, and becoming middle-class.
Why, this is a death sentence, Leader Pelosi! A death sentence! I cannot imagine the depression and psychological turmoil that will set in once Rep. Weiner becomes irrelevant and just another Joe Everybody. Have you no shame, Leader Pelosi!?
If anyone should resign it should be the 17 year-old girl from Delaware who is obviously working for the GOP. If anything she should be thrown into the clink for LYING about a good, decent man who only wanted to show off his new (Republican-planted) penis.
If the media had any conscience they would run wall-to-wall coverage discrediting this girl for the LIAR that she is — in between the Palin E-Mail segments and the latest on Paul Ryan’s End of Medicare As We Know It™ death toll tallies, of course.
Leader Pelosi, you have the power to stop this! Don’t punish a good man because the Republicans planted a penis on him! It’s just sex!

With Anthony Weiner looming as the Face of the American Left, the one they hate the most is coming out smelling like a rose.

The trove of more than 13,000 emails detailing almost every aspect of Sarah Palin’s governorship of Alaska, released late on Friday, paints a picture of her as an idealistic, conscientious, humorous and humane woman slightly bemused by the world of politics.

One can only assume that the Left-leaning editors who dispatched teamsofreporters to remote Juneau, the Alaskan capital, to pore over the emails in the hope of digging up a scandal are now viewing the result as a rather poor return on their considerable investment. 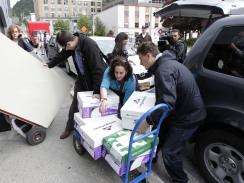 If anything, Mrs Palin seems likely to emerge from the scrutiny of the 24,000 pages, contained in six boxes and weighing 275 pounds, with her reputation considerably enhanced. As a blogger at Powerline noted, the whole saga might come to be viewed as “an embarrassment for legacy media”.

The email release could mark the end of a chapter of what conservatives have termed “Palin Derangement Syndrome”. Her enemies in the media appear to have overplayed their hand.

Isn’t it funny all the manpower and money they have invested to conduct this witch hunt, while the Real scandal was a little closer to their doorstep – right there in the House of Representatives where one of their own heroes was running an incredible internet predator operation right under their very noses.

Again, this is the American Liberal.  Corrupt hypocrits trying to run our lives when they can’t even meet the barest minimum standard of decency.

This is the kind of pictures regular normal people take of themselves…..

Actually, reading this article brought tears to my eyes,  as Sarah Palin is me, my family, my friends, my neighbors and co-workers and those who have the basic American heart that has made the country great, those who in their daily lives strive to raise their children to be good human beings, who demand truth and honesty from them, and who have the strength of character that is going to keep this country great no matter how some strive to destroy it.  Sarah Palin represents the Spirit of America that cannot be extinguished, but only gets stronger when threatened as it is today.