I’m learning all sorts of things.

In 2002, Weiner dated Fox token liberal, the irritating Kirsten Powers.   I cannot figure out what the attraction is.  The man is obnoxious.  Liberals are just weird.

Anthony Weiner’s former girlfriend, Kirsten Powers, defended him on TV to millions of people after he insisted to her that he didn’t send lewd photos on Twitter. Now she takes him to task for his rampant misogyny—and says he must resign immediately.

And he hasn’t even been married a year! 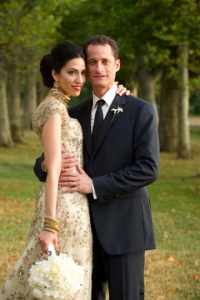 The power couple exchanged their “I do’s” inside the secluded Oheka Castle in Huntington.

Clinton jokingly said that marrying a politician can be tough because it’s “easy to distrust them, whatever their religion,” a source told the Daily News.

Guess he had no intention of keeping his pants on.  I see where Breitbart is holding a photograph that is even more graphic than the ones already released.