There were a lot of things said about this child-man before he was elected.  I never understood it.  He is so very easy to read and he screams “Fraud.”

“We just like to say his name. We are considering taking it as a mantra.” — Chicago] Sun-Times “A Lightworker — An Attuned Being with Powerful Luminosity and High-Vibration Integrity who will actually help usher in a New Way of Being” — Mark Morford “We’re here to evolve to a higher plane . . . he is an evolved leader . . . [he] has an ear for eloquence and a Tongue dipped in the Unvarnished Truth.” — Oprah Winfrey

Tongue dipped in the Unvarnished Truth?  HUH?  That makes me laugh. I think he does not speak unless it is a lie.  We’ve had a couple years now to realize this.  Since we are talking about a higher being, an “attuned being” with luminosity and all, in terms of messiah-like attributes, here’s something the Real Messiah had to say:

“…..for there is no truth in him [the devil]. When he lies, he speaks his native language, for he is a liar and the father of lies.”

Obama is not only a student but a teacher of Saul Alinsky, who without apology dedicated his book, Rules for Radicals, to “the father of lies.”
I, at one time told myself, well, he can’t control what others say about him.
But then Obama said himself, out of his own mouth, in his nomination acceptance speech, the following:

The poll showed a whopping 71% of voters disapprove of President Bush‘s job performance during the past four years. And 60% believe the government will work better now that Obama and the majority of Congress both belong to the same political party.

Notice how Bush’s 71 % unfavorability is WHOPPING and Obama 72 % is just a plain ole’ 72 % with no huge, whopping, enormous — nothing.  That’s how they brainwash.

“These aren’t just steps to pull ourselves out of this immediate crisis; these are the long-term investments in our economic future that have been ignored for far too long,” Obama said in the weekly Democratic radio address. The economic recovery plan being developed by his staff aims to create 2.5 million jobs by January 2011, and he wants to get it through Congress quickly and sign it soon after taking office. 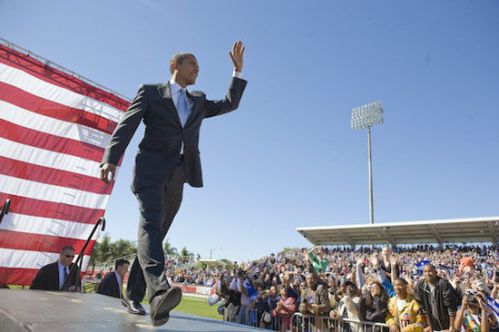