Why won’t the media report on the vitriol from the union protesters in Madison?

Good question.  But easy to answer.  Because the media in this country is corrupt.  They don’t actually report anything, as is commonly thought of as reporting, such as investigative reporting.  They just look on their computer and read what Media Matters or the white house sends them to report.

Do you think for one minute that, when Tucson happened, the major assault on Sarah Palin, Rush Limbaugh, talk radio, and the tea party was not a plan that was already in place to use anything they could find to give alleged president Obama his Oklahoma City moment?

It’s easy to spot, because within hours of the incident it was the talking point, it was their focus, on all networks and with the intensity to drive it into the minds of the people that because some mentally sick person murdered people, it had to be caused by the right or by talk radio.  It is absolutely absurd to entertain such a thought anyway, because if “vitriol” caused violence, God help us as to what is going to happen from the violent rhetoric and signs on display by the union and the left wing thugs (and teachers, let’s not forget the teachers) in Madison, Wisconsin, for the last week.  Better get the medics and the ambulances and the hospitals standing by.

Take a look at this liberal mob in Madison:

It’s all for the children. 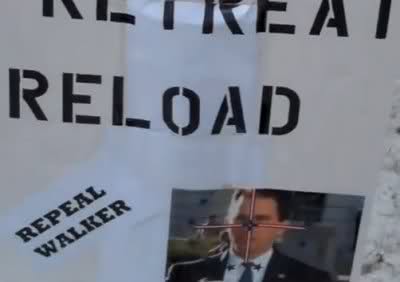