I was reminded today about the manatee seeking warmer waters in the winter, which in turn reminded me of the many places where they can be found. I can well remember as a child visiting Manatee Springs (better know as just Manatee).  This was when it was found in the middle of the woods only accessible by a two rut road that seemed to go on forever.  Of course, now it is easily visited with a nice paved road, but still has untouched woods within the park area.

There are so many springs and so many state parks in this area featuring the places in Florida that are not as well-known and publicized as the beaches and coastal areas.  Manatee is a first magnitude spring and boils up some 100 million gallons of water per day.  It runs into the Suwannee River.  (Spell check wants me to spell that with one “n” but they are wrong.  Suwannee has two “n’s” and I will not be persuaded to remove one.)

For millennia, Manatee Springs and the surrounding area have provided a home site and livelihood for humans. Artifacts found in the spring and adjacent areas indicate that people have been living and raising their families here for at least 9,000 years. The arrival of Spaniards during the 1500s brought an end to a series of cultures that lived in harmony with the earth for thousands of years. In 1774, William Bartram, a naturalist, botanist and artist, traveled through the area while exploring the Southeast. Later, he wrote a book about his travels, in which he described Manatee Springs in detail and noted the presence of manatees.

The first-magnitude spring at this park produces an average of 100 million gallons of clear, cool water daily.

So far it has been quite chilly and dry.  This means manatees need the warmth of the springs, and because the levels tend to run low, they prefer to bask where the spring meets the Suwannee River.  There they are bathed in the warmer waters that rush from the spring into the calmer river flow.  If you love the outdoors, and a real experience in Mother Nature’s world, you will find beauty at Manatee Springs in any season.  Enjoy the campground in the woods, where wildlife is very abundant.  Swimming is always open and quite an experience when the air is cold and the water feels warmer. 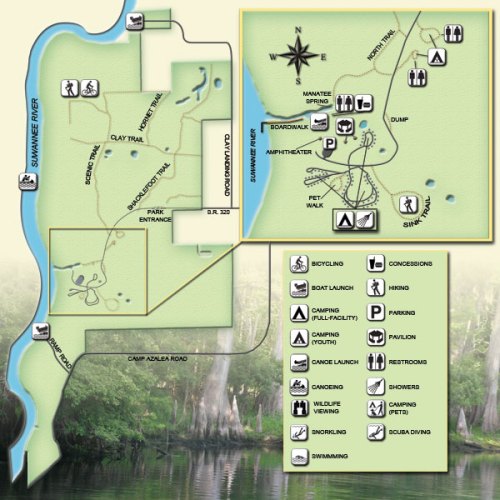 It is especially noteworthy to observe that the US Senate passed this bill in the dark of night, during a late Sunday night session when they hoped nobody was watching. This is an action they simply could not take in broad daylight during a normal business day when people might be paying attention. So they pulled a “quarterback sneak” and thrust this bill forward in a late-night session where nobody — and I mean nobody — had the courage to take a stand and vote against it.

Well, back to the down and dirty tricks and maneuvers of the 111th congress.  They stop at nothing, including deceit and malpractice.

I was trying to follow the food safety bill (S510) which was tacked onto the Omnibus bill (HR3082) to get around a constitutional issue – the Omnibus bill that was stopped in the Senate.  It was at this point that I lost track of it.

Take your eyes off the ball for a minute and you can’t even find the ball.  The following is the best I could come up with as to what happened to it.  Needless to say, they found a way to pass it.  I think my thread ran out with it on the way to the president for signature.  Which I know he did sign even though I can’t find that verified.

The House passed a sweeping food safety measure last summer. But that bill wouldn’t fly in the Senate. So the House had to give in this fall and accept a scaled back version from the Senate.

The Senate had to overcome numerous procedural hurdles to get its bill through in November. There were financial objections from Sen. Tom Coburn (R-OK) and Democrats had to put off Sen. Dianne Feinstein (D-CA), who wanted to ban the chemical BPA from baby bottles.

Then it turned out the Senate screwed up and included language in its version that were technically supposed to come from the House first — i.e. revenue raising provisions.

So the House fixed that and passed the Senate food safety bill again – this time as part of a bill designed to keep the government running through February known as a continuing resolution, or CR.

But late last week, Senate leaders feared that resolution might get snagged, so the food safety bill looked like it was in jeopardy again.

To avoid another showdown, the Senate passed the food safety bill again on Sunday afternoon — separate from the CR. Which now means it needs to go back to the House for a third vote. That could happen as early as Tuesday, and then it would finally go to the president for signature

Here’s the part I really like (sarc) but it tells a story all its own of the shenanigans that are engaged in to do what they want to do..  This from Tuesday, December 21. 2010:

Once again, outgoing House Speaker Nancy Pelosi, along with her sidekicks Waxman and Dingell, has used legislative “sleight-of-hand” to force through the “Consumer Assistance to Recycle and Save Act” (H.R.2751) with S.510 attached.  Just today, the Bill passed on a vote of 215 For and 144 Against.  It is rich irony indeed that the “Cash for Clunkers” reauthorization bill (H.R.2751) has provided the ride for S.510, another “clunker” that will unleash an avalanche of useless, business-killing paperwork upon the food industry and a swarm of parasitic FDA bureaucrats.  The result will be, as we have said all along, a food supply that is less safe, more expensive, and less abundant.  Anyone who thinks otherwise is living in complete fantasy land.

I’d like to see a little diagram of how this bill became a law.

And what was the roll call vote?  I don’t know.  That will take more research.