Had he survived, Elvis Presley would be celebrating his 75th birthday this year. The King lives again at Heritage Auctions’ August 14th Elvis Auction at the Peabody Hotel in Memphis. The auction is topped by the listing of Elvis Presley’s White Knabe Grand Piano which is expected to bring in over $1 million. Other items up for bid include his original 1955 RCA Contract, a signed Graceland Purchase Agreement, personal address book, love letter, jumpsuit and handgun. 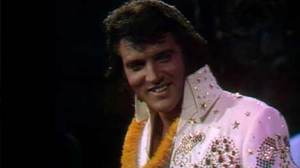 And speaking of Elvis and Auction:

Disgraced Illinois Governor Rod Blagojevich’s personal belongings are set to go up for auction by the storage facility to which he owes one year’s worth of back rent. Indeed, Boyer-Rosene Moving & Storage, a Chicago-area moving and storage company, plans to sell the contents of seven 5′ by 7′ wooden storage crates he has rented for the past eight years (as seen below), according to Paul Lombardo, Boyer-Rosene’s chief executive officer.

Most of the contents of the crates are documents, but there’s one intriguing item: a life-size statue of crooner Elvis Presley with a microphone in hand. 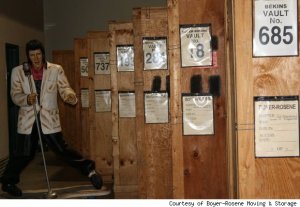 LAFAYETTE — Thousands attended a rally Wednesday in Lafayette aimed at persuading President Barack Obama’s administration to lift the federal offshore drilling moratorium, which officials said could further endanger the state through the loss of tens of thousands of jobs.

About 11,000 people attended the “Rally for Economic Survival” at the Cajundome and thousands more watched online.

Gov. Bobby Jindal was one of 12 speakers at the roughly two-hour event and pleaded with Obama to allow people to go to work.

The rally was in opposition to the Obama administration’s ongoing efforts to temporarily block deep-water drilling following the Deepwater Horizon rig explosion. 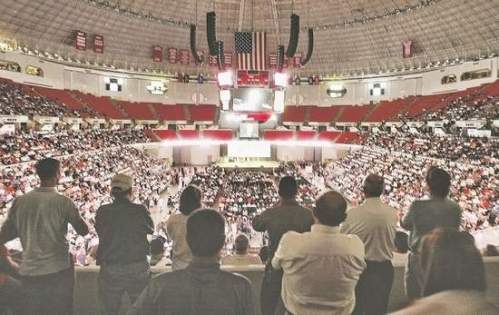