Stand off while Obamas at BBQ

An interesting “stand-off’’ of sorts developed outside a barbecue President Obama was attending at a friend’s house Saturday night between followers of Nation of Islam leader Louis Farrakhan on one side and members of the press and the U.S. Secret Service guarding the president on the other.

lives across the street from the ornate yellow-gold home where Farrakhan lives.

For the past two years, when Obama has brought his family over to Nesbitt’s home, the press pool bus parks near Farrakhan’s house. This usually does not cause a problem, but Saturday night — as most of the city was indoors watching the Chicago Blackhawks beat the Philadelphia Flyers in the Stanley Cup finals — a bit of tension emerged on Woodlawn Avenue.

A pool report noted that as a dozen reporters and photographers following Obama stood on the sidewalk in front of Farrakhan’s home, someone’s foot touched the city-owned curbside grass.

Immediately, a polite man in jeans and T-Shirt emerged to ask the press to stay off the grass, the report stated. Soon he was pacing and talking on a cell phone. He went inside the mansion’s black wrought iron fence, crossed the well-landscaped yard, lifted a water bucket behind rose bushes and retrieved a walkie-talkie. He was heard to refer to “the CIA.”

[The Secret Service is a separate agency from the CIA]

Soon he approached the secret service agent minding the press and asked him to move the van and its occupants.

“How is this a security breach?” the agent asked. He asked if the house was government property. Neighbors all over Hyde Park and Kenwood have learned to deal with streets being blocked off and having to show ID to approach their own homes since Obama ascended to the presidency.

The man said something else and at that point the agent stuck out his hand to shake hands and introduced himself as a Secret Service agent. He added, “Sir, I can assure you that we will do nothing to interfere with whatever is going on in there.”

The man paced and talked on his cell phone, walkie-talkie in hand. Three more men in T-Shirts reading “Wide or Die!’’ joined the man from the Nation of Islam. A reporter asked one of the men if this was Farrakhan’s house. The man just stared back. Asked again, he said, “I don’t have no comment.”

Eventually a dozen “Fruit of Islam” agents arrived. As each casually dressed man arrived, he exchanged elaborate handshake/hug/double air-kisses with others. Two walked by a reporter, chanting “Islam.”

The men filmed and photographed the reporters, the van and its license plates with their cell phones.

The agent asked the reporters to go back into the press bus, which they did.

Before they did, some asked the Nation of Islam crowd if they could use the rest room in Farrakahn’s home.

No offer was made.

Rev. Gary Hunter, a Baptist minister in Detroit who writes and blogs for the Detroit Times, told reporter Jackie Calmes of the New York Times that he called Farrakhan and his son and asked them to have the Fruit stand down: “I told him you were good people . . . He said he didn’t know you all were just waiting for the president.’’

The Blackhawks won the first game of the series around 10 p.m. — and Obama and his family were driven home at 10:43 p.m., the press bus in tow, ending the “stand-off.’’

Jackie (tar ball in bathing suit) Calmes was present.  I guess that just means that she is a member of the roving press corp that follows the Obamas everywhere.

And did you plug the hole yet, daddy?

“What can he really do?” said Billy Ward, a developer who comes to his beach house here every weekend and, like many other locals, had little positive to say about Obama’s trip to the beleaguered region on Friday. “If he wants to do something, let him get out there and pump some mud and cement into that hole. Just fix it. Help us.”

Obama in starched white dress shirt, picks at tar balls for the camera

What is wrong with this picture? 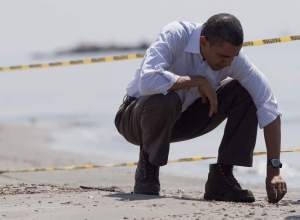 But did anybody think he would know what to do in a crisis?  Thanks all yall Obamacrats.  Now we all pay.

And the media is still trying to help:

New York Times reporter Jackie Calmes was skeptical: “Can you be sure these oil tar balls are from the oil spill? Because when I used to swim on the Gulf in Texas, I’d get tar balls in my bathing suit all the time.”

Allen and Randolf, the parish president, confirmed that tar balls do wash up at other times, though these, they said, were likely from the spill.

But the president was distracted. “At some point, Jackie, we’ll want to hear more about those tar balls and your bathing suit,” Obama said, as reporters laughed.

But he’s beyond help. 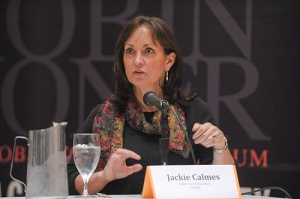 Back to you later, Sweetie