Seed of Peace?  How about, instead of a mosque, as an act of humility and sorrow, using the funds for a memorial and hall of tears honoring the dead? 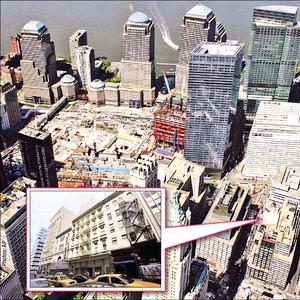 After hours of contentious public comment, a New York City community board has voted to support a plan to build a mosque and cultural centre near the World Trade Centre site.

“It’s a seed of peace,” board member Rob Townley said after the plan was approved late Tuesday.

Manhattan Borough President Scott Stringer said in a statement that by supporting the multi-faith community and cultural centre, the board “sent a clear message that our city is one that promotes diversity and tolerance”.

Is it a multi-faith community or a mosque?

First of all, how does this group come to own land two blocks from the site of the trade center?

Imam Feisal Abdul Rauf, executive director of the Cordoba Initiative, is one of the project’s sponsors.

What they could do, as “a seed of peace” and symbol of diversity, is to construct and dedicate a memorial on the property with a huge statue of Christ on the cross, a Star of David, stones containing the Ten Commandments and a plaque of apology that this violent deed was perpetrated in the name of Muslim extremism.  They owe the United States of America, and particularly New York City, an apology in perpetuity.

It certainly is not respectful to the dead to be swimming and cooking two blocks from the disaster of the death of 3000 people.  They really should be ashamed for even bringing such a thing up to poke a finger in the eye of the dead and the mourners of the dead.

Diversity and tolerance can go two ways.  What is needed is some sensitivity and empathy on the part of the planners and promoters of this project, and if families of the dead are offended by this, the imam and sponsors of the Cordoba Initiative should not build it.