President Obama visits Billy Graham at his home in Montreat

Barack Obama today became the 12th president to meet with Billy Graham, and the first sitting one to visit Graham’s mountaintop home in Montreat.

In a meeting that lasted 30 to 35 minutes, the president and the 91-year-old preacher prayed for each other ….. 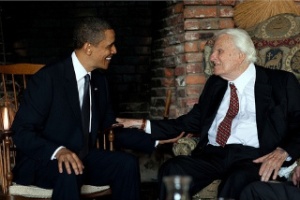 His son, Franklin Graham, was recently dis-invited to the National Day of Prayer by the Army:

The younger Graham [Franklin] also said the Pentagon’s decision to disinvite him also came up.

“He was going to look into it,” Graham reported.

Did that mean there was a chance he would be re-invited?

“Well, you don’t know,” Graham said. “He is the commander-in-chief.”

[But it didn’t happen.  Graham had to pray outside the Pentagon.]