UPDATE:  The protester, who refused to give his name, was interviewed by a man carrying a microphone and said, “I am almost always armed.”

“Absolutely,” Hancock told CNN’s Rick Sanchez Tuesday. “You guys are so easy. What we wanted to do was make sure that people around the country knew that law enforcement in Phoenix, Arizona, protects our rights.” [CNN.com]

One protester who didn’t want to give his name was walking around with an assault rifle – in full view. 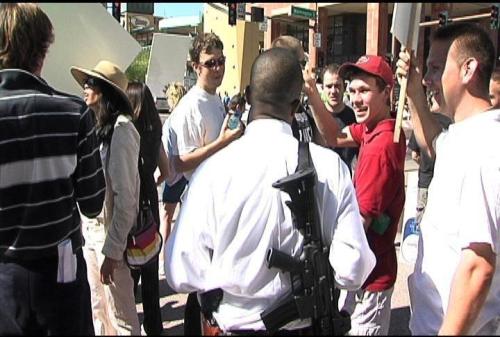 “I’m exercising my right as an American in Arizona,” he said. “I’m actually totally against healthcare in this way, in this manner, stealing it from people. I don’t think that’s appropriate.”

The man also carried a hand gun on his hip and a round of ammunition in his back pocket, all completely legal.

He said he’s fighting both healthcare and his right to carry a firearm in public.

Let’s see if Chris Matthews or Dear Rachel jump on this one.  A man carrying an assault rifle, a hand gun on his hip, and a round of ammuniation in his back pocket.  Let’s see — why is it I don’t think we will hear too much about it.  I could be wrong.  Update:  Well, I was wrong in a sense.  They did cover it but altered the tape to present the story the way they wanted it to be.  See:  http://hotair.com/archives/2009/08/19/unreal-msnbc-edits-clip-of-man-with-gun-at-obama-rally-to-support-racism-narrative/