William Ayers and Bernadine Dohrn – Digging a Little Deeper, Who is Chesa Boudin?

In the recent New York Times article entitled  “Crossed Paths of Obama, 60’s Bomber” it was reported that:

In his memoir, Mr. Ayers was evasive as to which bombings he had a hand in, writing that “some details cannot be told.” By the time of the Brinks robbery, he and Ms. Dohrn had emerged from underground to raise their two children and then Chesa Boudin, whose parents were imprisoned for their role in the heist.

The mention, almost in passing, of Chesa Boudin made me wonder, just who is Chesa Boudin?

Katherine (Kathy) Boudin and David Gilbert were sentenced to life terms for the 1981 Brinks armed robbery in which two police officers and a Brinks guard were killed, leaving behind a 14-month-old boy, Chesa Boudin, at which time William Ayers and Bernadine Dorhn took guardianship or custody of the child.

On Oct. 20, 1981, Sgt. Edward O’Grady, Patrolman Waverly Brown and Brinks guard Peter Paige were gunned down in Rockland County, N.Y. by heavily armed terrorists. The half dozen gunmen — all Americans — were members of the Weather Underground, a faction of the Students for a Democratic Society and the Black Liberation Army, formed from members of the Black Panther Party and the Republic of New Afrika.

These improbable violent coalitions were committing armed robberies (this was number 19) to finance their “revolution.” At stake that day was an armored truck with $1.6 million in cash. Thanks to the bravery of the dead officers, the terrorists failed; but left behind were three widows and nine children, like most victims all largely forgotten.

In December of 2002, at age 22, Chesa brought it all back into the news when he was awarded a Rhodes scholarship to Oxford University, England, with the following points being made:

Guardian Dad, the distinguished Professor William Ayers, not only hides his some 17 tattoos under his smart suits, but these days he is writing books about his exploits as a revolutionary and his bombing activities. However, in describing a bomb he placed in the Pentagon, Ayers brags a bit too much. “It turns out that we blew up a bathroom and, quite by accident, water plunged below and knocked out their computers for a time, disrupting the air war and sending me into deepening shades of delight.”

Guardian Mom, Bernadine Dohrn, (Mrs. William Ayers) described by former FBI director J. Edgar Hoover as “La Pasionara of the lunatic left,” now pretends that her widely publicized support for the Manson Family killings in the ’70s was a joke.

In a speech during the December 1969 “War Council” meeting organized by the Weathermen and attended by about 400 people in Flint, Michigan, Dohrn said:   “Dig it! First they killed those pigs and then they put a fork in their bellies. Wild!”

“We were mocking violence in America,” she has said. Yet she does not deny her leadership of the terrorist cult, and none of her comrades thought the lovely Bernadine was joking.

Chesa’s grandfather, Katherine’s father, was a secret Communist Party strategist. Leonard Boudin masqueraded as a civil rights lawyer during the years the Weathermen killed, robbed and bombed, but really was a contact man for such hostile foreign powers as the Soviet Union and Cuba. Daughter Katherine was one of New York’s elite, attending good schools such as Bryn Mawr, enjoying a year in Moscow and developing a social conscience that allowed her to plan the killing and maiming of her fellow Americans.

These people were not playing. 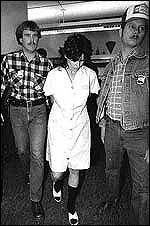 More recently, Chesa Boudin is a co-author of The Venezuelan Revolution: 100 Questions–100 Answers. In 2005 he worked as an intern on President Chávez’s foreign policy team, doing research for a master’s degree in Latin American public policy at Oxford University on a Rhodes Scholarship.

Things are disappearing all over the web, but below is another site with his picture.

And very interesting detailed account of the Brinks heist at:  http://www.trutv.com/library/crime/terrorists_spies/terrorists/brinks/4.html

11 responses to “William Ayers and Bernadine Dohrn – Digging a Little Deeper, Who is Chesa Boudin?”