There’s an old adage that says,  “Tell me who your friends are, and I’ll know who you are.” 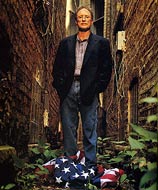 More on the Bill Ayers/Barack Obama connection in this article called Obama’s Judgment In Doubt  at a great new website called The Daily Beast.

With only four weeks to go before election day, the McCain campaign is training its guns on Obama’s character and judgment, especially his relationship with Weather Underground terrorist Bill Ayers.

It’s all about character and judgment.